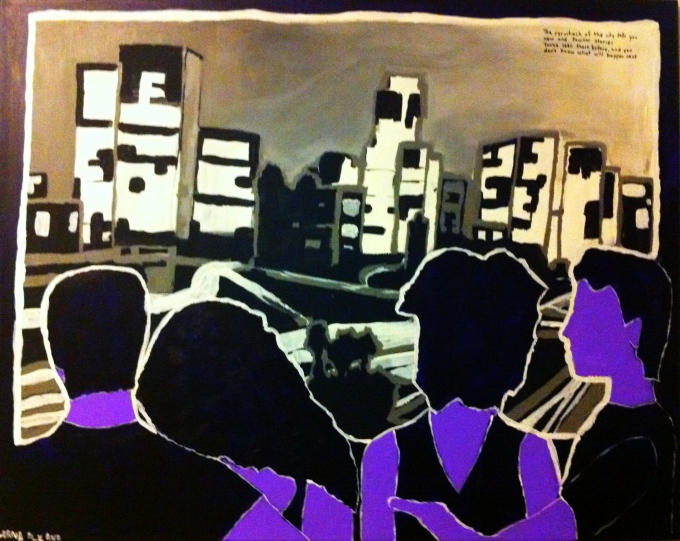 The rorschach of the city tells you
new and familiar stories.
You’ve seen these before, and you
don’t know what will happen next

My friend Jackie and I did an art swap.  I bought fabric for a skirt she’d make; she bought a canvas for some art I’d make.  Jackie is moving from LA to Portland.  She requested something black and white with pops of color.  She also wanted the painting to remind her of LA.
The process of creating the painting was trying but fun to figure out.  Making lines and shapes was way different for me on the scale of the canvas (24″x30″) which is much larger than the tablet I’m used to working with.

This process allowed me to reexamine how the text I add to most of my drawings fits in with the rest of the image.  I realized that with purposeful and thoughtful typography, I can integrate the verbal with the visual more effectively.  Unfortunately, I realized this after I considered the painting done and gave it to Jackie.

I started with a Photoshop drawing, then I used paper cut outs to help me get proportions and shapes onto the canvas.  My friend, Ash, gave me advice to start painting what was furthest away.  Although I tried,  I couldn’t help but be all over the place.  I needed to get an idea of what every element would look like (beyond the Photoshop mock-up), so as to inform the best direction for the painting.
I may prefer the beginning layers.  They’re much simpler than the final version, though they communicate the same general idea.
This is the Photoshop version: 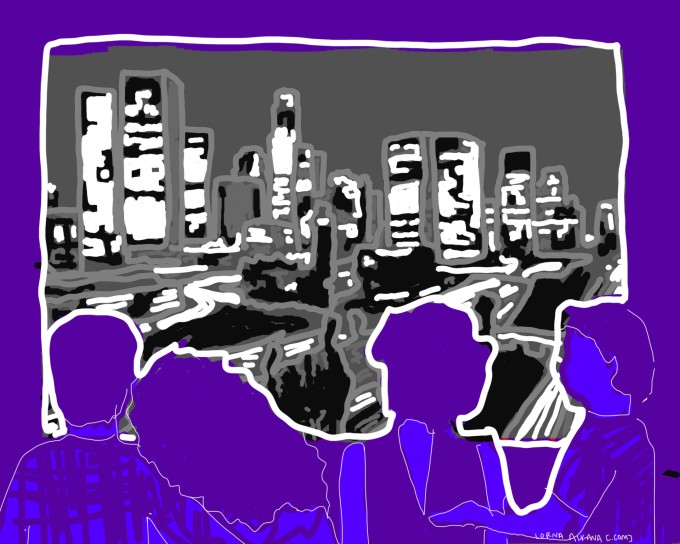 These show some of the stages of the process (moving backwards in time):