Stephanie gave me two turtles when I was a senior in high school.  One survived.  Can you find him in the drawing?

I have a turtle named Turdy.  I’ve had him for almost 8 years.  I just pimped out his tank.  Now he has a floating dock, a filter, and a twice daily feeding schedule.  I put a piece of blue paper over a light behind his tank.  At night his tank glows blue.  I call it Club Turdy.  He looks happier.  He often stretches his legs, arms, and head far from his shell, reaching to the surface and depths of his tank simultaneously.  He digs and perches.  He follows my finger when I press it to the glass and slide it from side to side.  I think he’s growing. 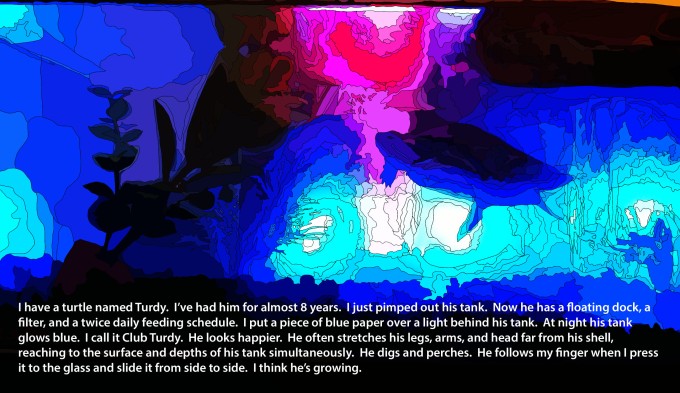 *This first posted this on August 2, 2012.  I like what I wrote about it, though i wish I had found a different way to say, “pimp out.”  I love this drawing because it reminds me of my turtle.  I have a great turtle.  I’m glad that I was able to give him more space to live.

This is one of my first pieces that is completely photoshop drawing.   This is to say that my earlier digital drawings included the original photo in one way or another (color, texture, gap corrections, etc.).  Here, I created more layers than I had ever done previously, because I wanted to use my lines to show the water, plant, shadow, and light details.