Today I marched with my mom, my friend Sylvia, and more than 750,000 other people at the Women’s March in Downtown Los Angeles in conjunction with millions of people throughout the US and around the world.

In addition to my shaky camera, I used photos that my mom, Linda Alkana, and friend, Shabnam Ferdowsi took as source photos to create this drawing.  It’s not done.  In many ways this is not over. 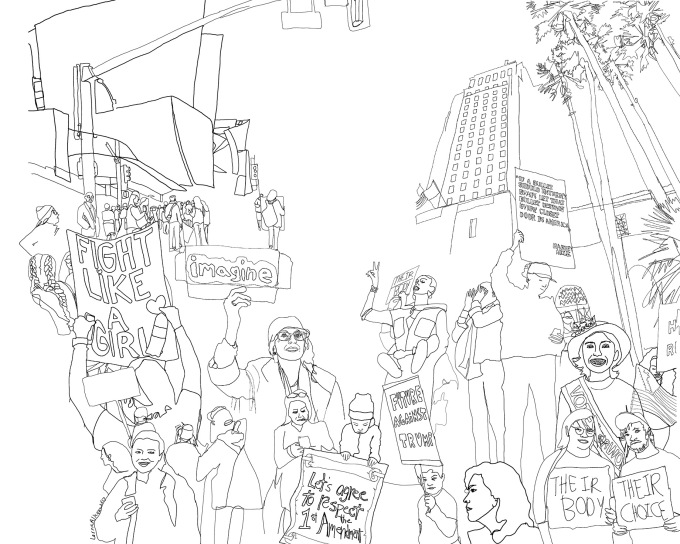 I’m still processing how I feel about this march.  I’ve been feeling pretty down and alone.

“Pussy” and imagery associated with the term were used imaginatively and explicitly a lot more than I’ve seen before.  Knit pink caps kept many heads warm.  People’s dissatisfaction with Trump manifested as hair and hand jokes.  Drawn, painted, and printed slogans on  many posters dispelled, reacted to, and challenged xenophobic, nationalistic rhetoric.

Context sets in faster and faster, these days, and the pieces fit together at both paralyzing and invigorating rates.  The current puzzle pieces (incomplete): Trump won the electoral college, water protectors are freezing in North Dakota, refugees are treated like criminals, the justice system consistently allows police to assault and kill people, especially black people, without consequence, rapists are painted as victims and given less time than people (especially people of color) who are/were caught with pot, corporations that defraud nations escape accountability and continue to profit and support projects that contribute to climate change, systemic racism, and corruption.

The new administration treats Health Care like a poker chip.  White men are payed more than people of color and women for doing the same work.  Los Angeles has the largest population of people who do not consistently have a roof over their heads or a safe place to call home.

The mass of the support serves as a microphone for an extraordinarily underrepresented majority.

I joined a complicated, opinionated crowd.  Many.  Ready. Concise:

I wonder how people feel about the march.  Did you feel represented?  Why did you come, why did you not?  I wonder where people at the march felt the best, the most safe and supported.   I wonder who didn’t like the march and why.

I update my Exhibition Page with events and galleries Lorna Alkana Art is featured in.
Check out the Disclosure Page to see a chronological evolution of my blog and art.

I share new art/discussions about the process of works in progress, and I post segments with Comic Lorna in my audiobio comic series called, Affect.