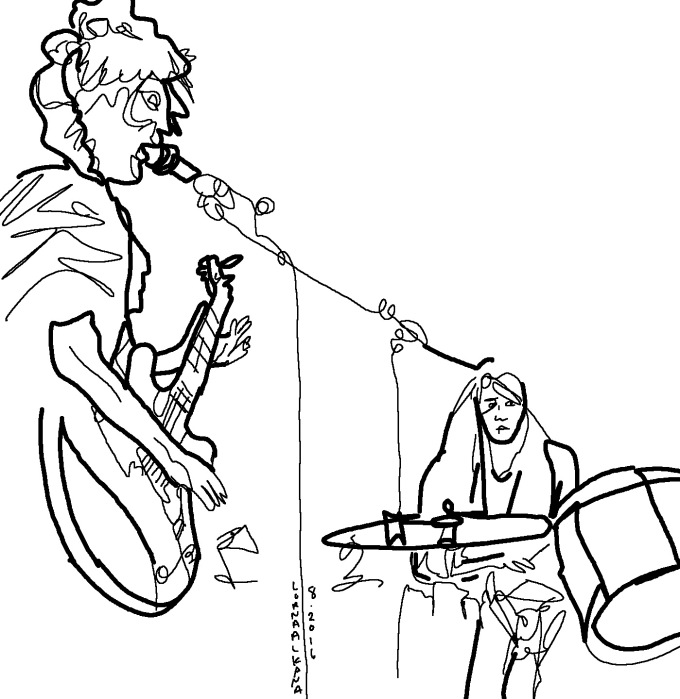 I was a free agent for this year’s Echo Park Rising, and it was amazing!  I had a notebook, more than enough pens (but rarely the right one, for some reason), a few flyers for my Little Tokyo exhibition, and a phone with not enough memory (per usual).

Thursday
I started at the VHS Video Social featuring Daria and Ghost World at the Echo Park Film Center.  Ghost World in particular was a movie anthem for me in high school.  The protagonist, Enid, played by Thora Birch, keeps a journal in a way that I could/can relate to.  I started to draw life drawings/observations way more in my journals after seeing that movie and reading the comic.  Written by a dude, Daniel Clowes.  Go him!

After that, I headed to see The Comedy Garage‘s Studio Sessions at a private venue down the road.  Those guys put on a great show full of a talented regular crew, touring jokesters, and funny storytellers.  This was a special Echo Park edition of their show.  It’s every Thursday night.  Highly recommended!

Friday
I headed to The Lost Knight for Beating Lights‘ line-up.  I just missed WASI (**sigh**) but got to see MiniMall for the first time.  The all female band, save a wonderful dude drummer, killed it with harmonies, snaps, claps, keys, horns, and the brilliant strumming of guitar and picking of bass.  I can’t wait to see them again!  [VIDEO] Check out my recording of some of Minimall’s set! 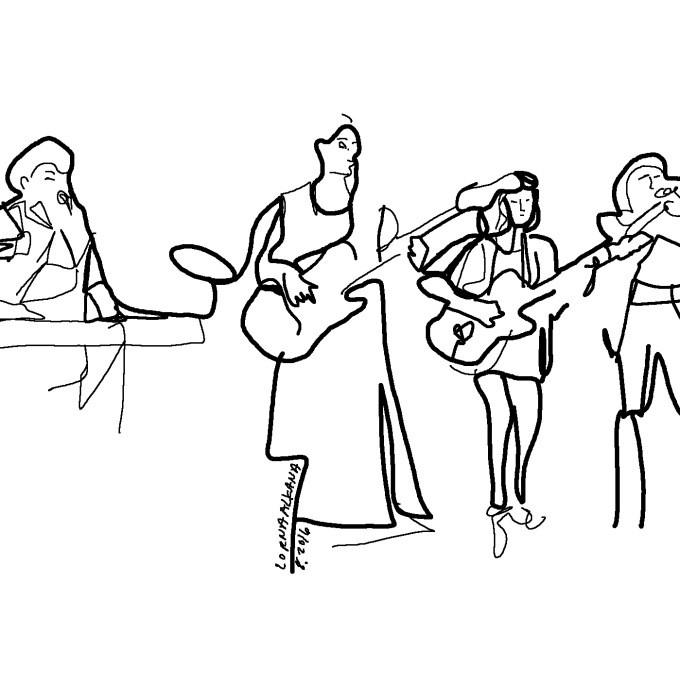 I caught one of my favorite bands, Send Medicine, a bit later at The Lost Room (affiliated with The Lost Knight).  I love their dreamy anthems and jams.  [VIDEO] I recorded an amalgamation of segments of their songs.

I sweated with the best of them at the private party at 1836 Sunset Studios, dancing to CIVX, Dino Bones, and La Tumba.  There is a lot of art at that venue.  I found a chance to sit down and start my portraits.  Found some faces.  [VIDEO] I did manage to squeeze through the dancing limbs to catch a video of CIVX.  And here’s a [VIDEO] taste of La Tumba’s set.

Saturday
I ventured to the Shop Used // Shop Local event at a warehouse beneath the bridge on Glendale Blvd.  I drank some free beer, talked to the vendors, and found a seat to continue my drawing before Wam Dingis took the stage.  Oh I love Wam Dingis.  I discovered The Walkmen, The White Stripes and Buzzcocks in high school, and these guys remind me of those sounds.  I went to high school with two of the member of Wam Dingis so there is this generational or proximity wave-length element I might be vibing on.  Or probably, they’re just GREAT!  They had a stripped down set for this event and still killed it.  They’re releasing their EP on September 10th at Non Plus Ultra!  [VIDEO] Here’s a bit of them IN THE LIGHT OF DAY at Shop Used // Shop Local .  I long for Mindy (Rhodes/vocals/violin) and Angela (bass/vocals) but the set abides!  Oh man, I love this band.

I popped into the 1836 private party to catch Six Weeks.  Their music definitely has a thorough, melodic punk sound that brings and emits both darkness and lightness.  So it works out. [VIDEO] I’m stoked my phone had room enough to catch a good amount of one of their songs.  Is that a lady on bass?  Yes.

I was happy to see the amazing Jet Jaguar play at 1836 Sunset Studios.  I missed out on The Misfits intentionally while in high school, and these tunes have all the sounds I love from that genre without the brutal misogyny.  I caught a [VIDEO] of them between the swaying heads.

AC the PD posted up outside of Two Boots with his Hip Hop Philosophy beats.  [VIDEO] I caught some of the set and the sidewalk flow.

I saws The Great Sadness at The Lost Room.  Their two person act is dramatic and suspenseful; awkward, honest, distant.  The singer pleads, a beautiful, throaty pain, with an anger that dispels distress.  Thoughtful angst, maybe.  Can’t wait to see them again.  I managed to [VIDEO] a glimpse.

Sunday
I met a friend of mine at Echo Park Lake to talk about and begin collaboration on a project called Affection.  I’m excited about our discussion, and I’ll have more info soon!  As we create!  Go team!

Ran into some friends.  Killed time at Taix drawing portraits.  Met a few people who were from my home town.  Small world.  Short sentences.  Small sentences.  I drew them. 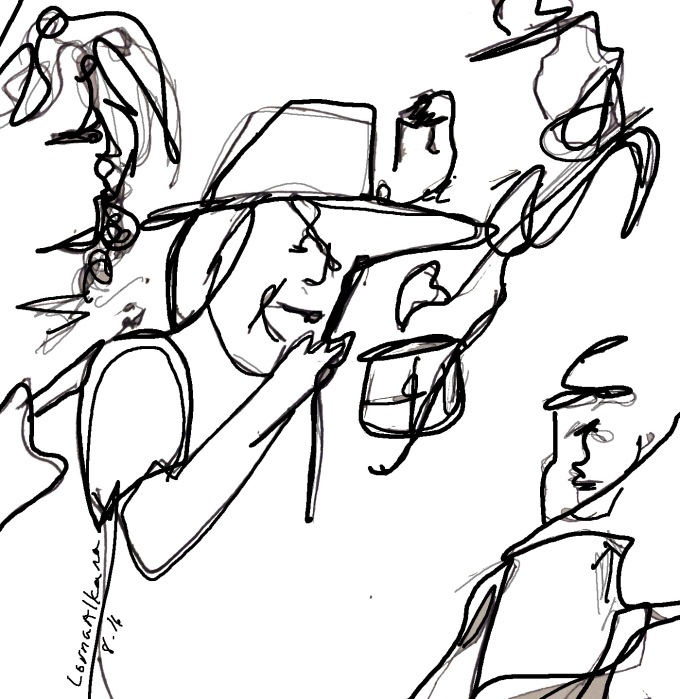 Ritter’s Boogie Woogies Blues Jam at 1836 was my next stop, as it was for many other people as well.  I had the pleasure of hearing the amazing vocalist @notyettrending play with @dreadfro and @jameshoulahan .  I thought they must had played together before, but nah.  @notyettrending (Ciera) had just popped in to see what was up.  The jam asked if someone wanted to sing and she said yes!  I talked with her outside.  She’s one of the EP Rising faces I drew.  See a snip bit [VIDEO] of her performance and all of the great jammers playing with her here.

I made it to Lot 1 just in time to see Fun Game‘s full set!  Their music surprises me in its time.  Their set list varies to the extent that I bet there is a story in there.  I’ll have to see them again!  [VIDEO] Here’s a bit of what I saw. 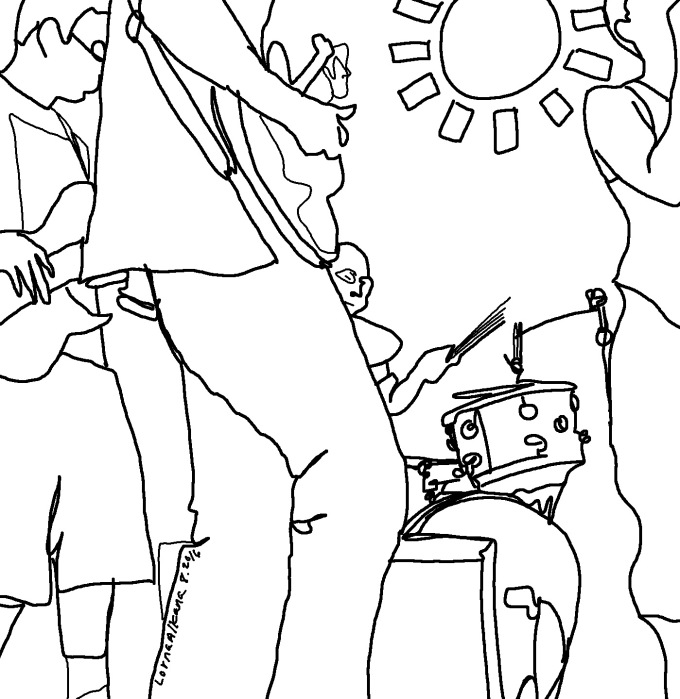 Westerner closed out Echo Park Rising 2016 with an incredible set at Lot 1.  The band is as bazaar as they are talented.  Their music is both from outer space and grounded in incredible technical skill.  Check out my brief IG [VIDEO] from the show. 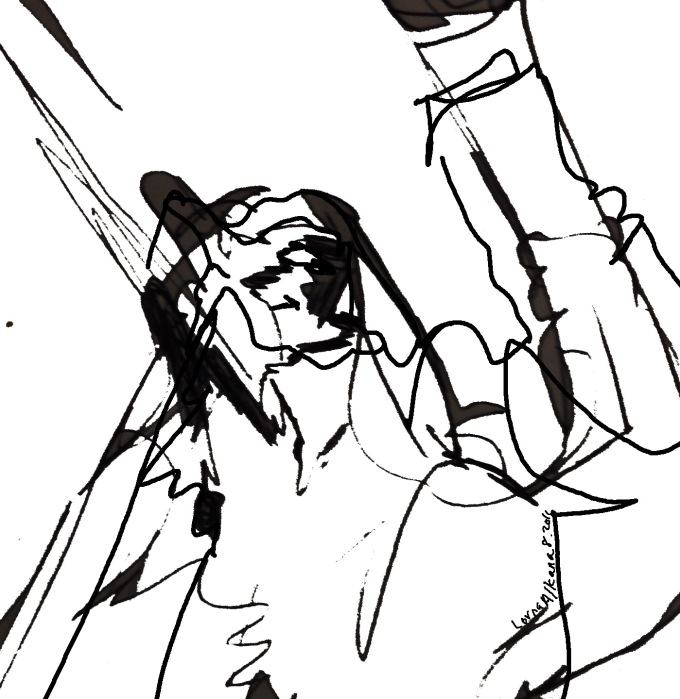 Here’s a peak at the faces of people who I ran into throughout the festivities.  Stay tuned for more info on these!