I hadn’t made it out to a Play Like a Girl event in a few months, so I was stoked to rejoin the fun with my Make Note magic keys.  I made a few changes to the installation based on ideas post FemFest 2017 [see how that went here], and incorporated my black light doodles of the featured musicians on the keys.  There were four featured musicians, Hydro Kitten, Aalok, Sudan Archives, and Kid Wave but 14 keys, so I doodled ten other women musicians I dig for good measure.

These are scanned images of the drawings with some toying with saturation and brightness to give the affect of the black lights.  The actual glowing versions are a few scrolls down. 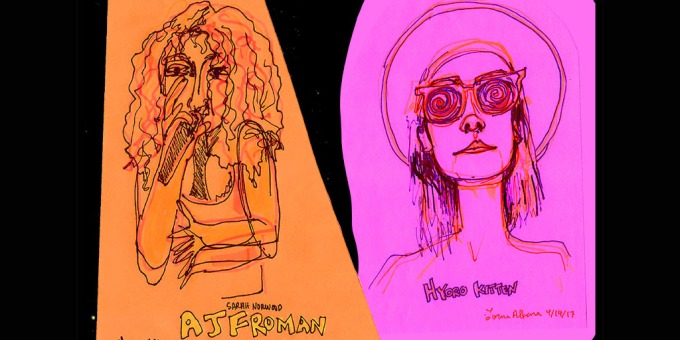 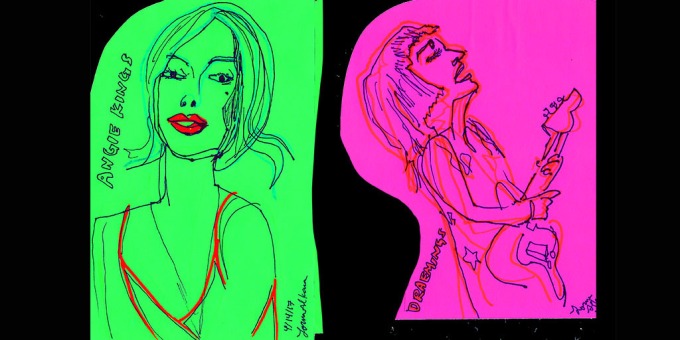 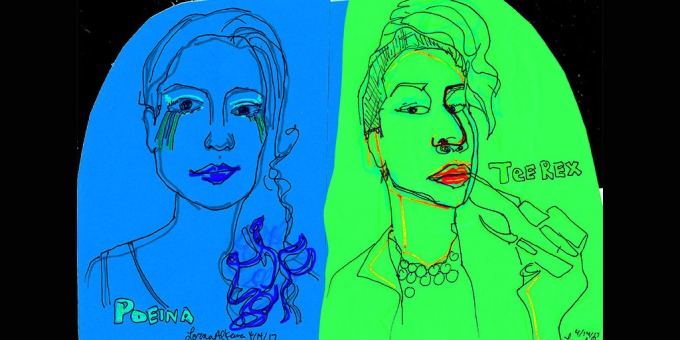 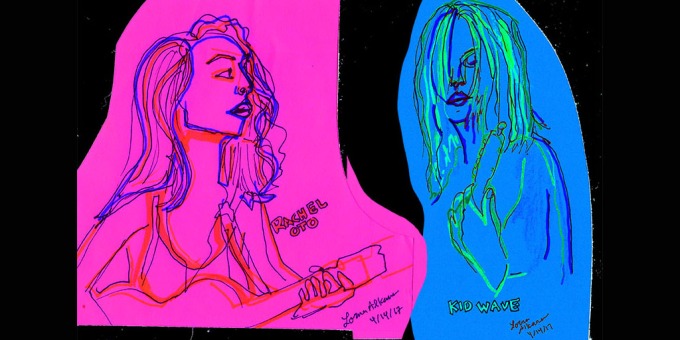 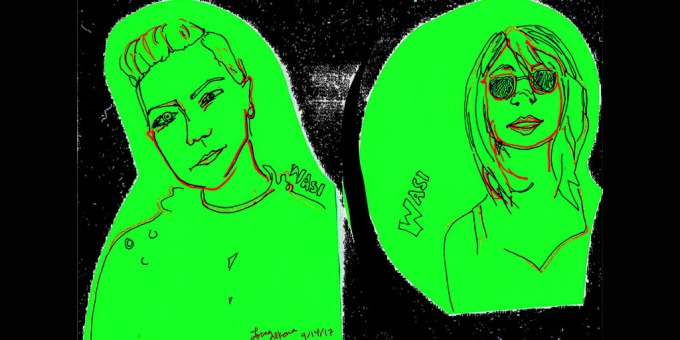 I also updated the sign with a giant green shout to to Play Like A Girl (PLAG).

I showed up at 3:30 PM to set up for the 5:30 PM start and had plenty of time.  Shab was set up with her Bummer Popsicle button making and Lucy was killing it with her punk needle points.

I wandered about to capture a bit of the vibe in video before the doors opened.  You’ll see the glitter lady, Aurora bedazzling the lips of PLAG attorney, Katrina:

I asked Zinesters Keelin and Bailey to get the doodling started.

Unlike FemFest, there was no wind to mix things up.  I ended up with a video from behind the keys which has an odd voyeuristic feel.

I only had one table this time, so I joined the Make Note table more than at Fem Fest.  It was cool to figure out which pen made which color and talk to someone across the table through the slots in the black light stand. 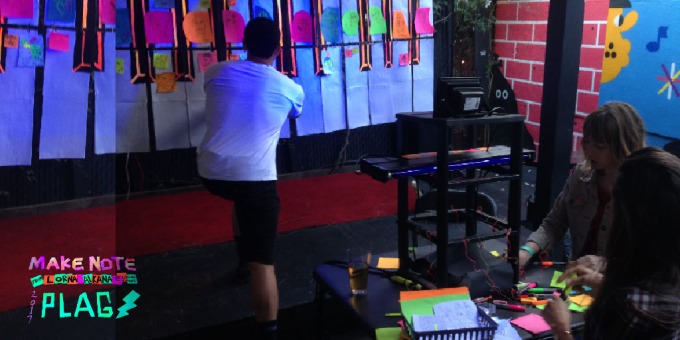 I had been musing about the best way to present the pens, and the hemp rope attached to the black light stand and pen/highlighters worked well.  One woman bit the hemp rope to free the pen so she could take it up to the keys and add to her drawing there.  All good.

The set-up must be such that keeps the creating at the table, because people haven’t asked to draw directly onto the keys or even tried to. 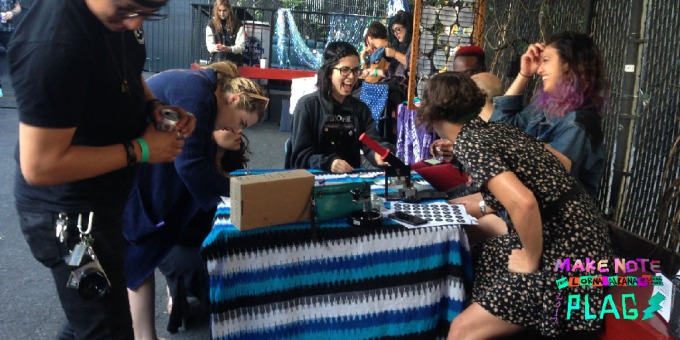 As it got darker, the glow began.  I always love this part.  My mom and aunt came to visit!

Here are pictures of the portraits under black light.  It’s really hard to capture, which might be an important element to the installation.

It looks so so cool, and the first thing someone might want to do is take a picture of it.  I saw a lot of this.  People go to take a picture and then adjust to make it better, and eventually realize that the photo is not going to be as vibrant as the real life glow.  (Maybe I’m projecting.  In more than one way:)

The initial placement of my musician portraits may have thrown people off.  I used paper that is larger than the post its.  I included larger fluorescent paper and tape with the Make Note supplies to remedy this.  Some people took advantage and balanced out the keys. 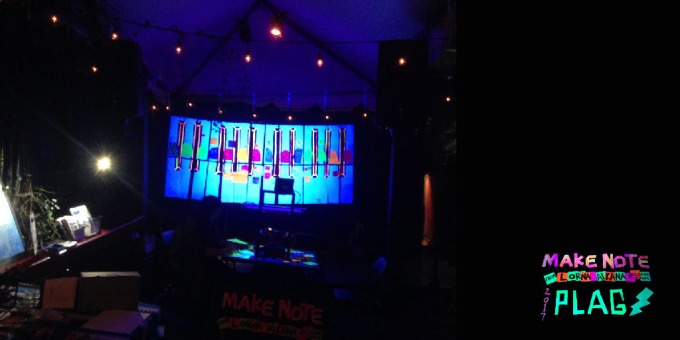 The keys had a good 45 minutes of darkness before I had to start cleaning up at 8:30PM.

Although the fluorescent paper is fun, and draws attention to the black-light-of-it-all, I’m drawn to the art on white paper that blends in with the keys.  I noticed this because I had also included white scrap pages from one of my coloring books on the Make Note table.  The line drawings are from photos of a previous PLAG event.  How fitting. 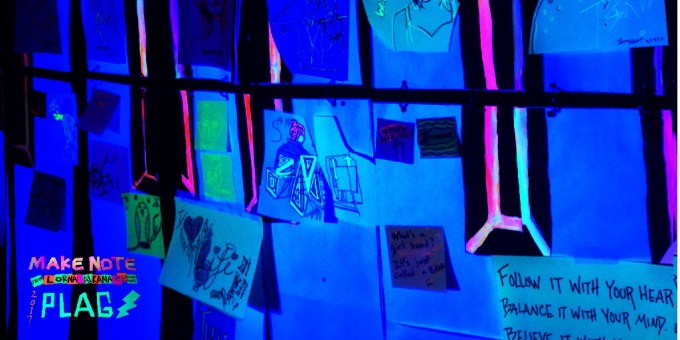 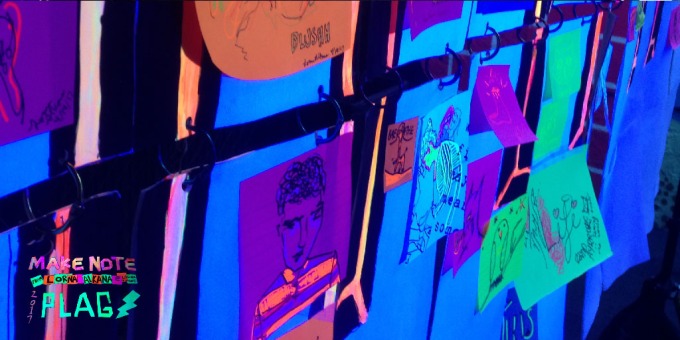 I took screen shots of a few Instagram stories that mentioned the magic keys.  Much love.

Now with two trials of “Make Note” under my belt, I’m excited to give it a third go this Friday with PartyPunx at The Airliner for The Launch of Loche.  I’m going to mix it up again, and the result will probably look very different than it has.  I’m probably going to change the name of the installation to Magic Keys (or use that as a subtitle or something) because when Katrina used that in her Instagram story it made the click I’ve been waiting for.

I update my Exhibition Page with events and galleries Lorna Alkana Art is featured in.
Check out the Disclosure Page to see a chronological evolution of my blog and art.

I share new art/discussions about the process of works in progress, and I post segments with Comic Lorna in my audiobio comic series called, Affect.