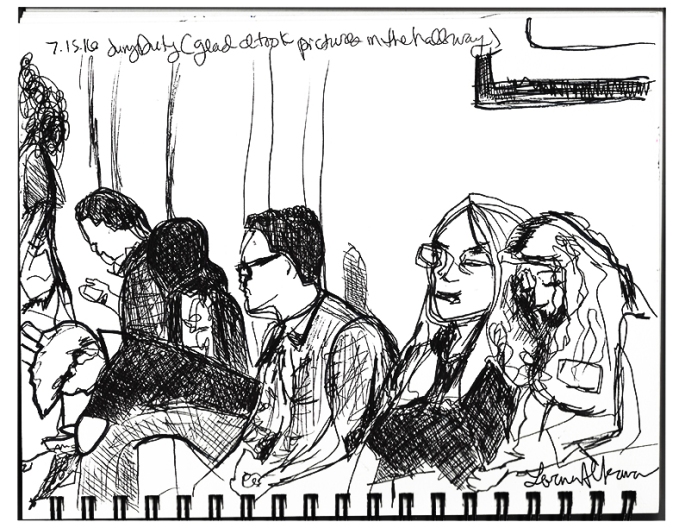 Last Thursday I went to the Westminster Court House to catch Pokemon and sit for jury selection.  Selection took two days.  I was the last juror chosen for the box.  I wanted to be chosen, though I had to miss work and wake up early.  The trial ended Tuesday afternoon.  I can write about it now; I couldn’t talk about it at all while it was in process.  It was a criminal case.  The defendant was a 25 year old white guy accused of brandishing a knife.  We found him guilty after a total of four days, which is one to two days longer than the judge had thought.  Deliberation took about 30 minutes.  The initial blind vote in the deliberation room was 10/2 guilty.  One of the people who voted innocent didn’t understand the requirements for self-defense, so that was quick.  The other innocent voter didn’t want a sweet-young-man to have a record, so that was also quick to switch.  We’re not supposed to think about the sentence.

There was a lot of silent waiting.

On the first day, I walked into the holding area and found a table.  I asked to join the woman already seated there.  I took out my notebook.  She took out hers.  She started drawing a traditional tattoo with pencil.  I acknowledged it was dope.  I started writing this (my messy cursive is revised and typed below the notebook scan): 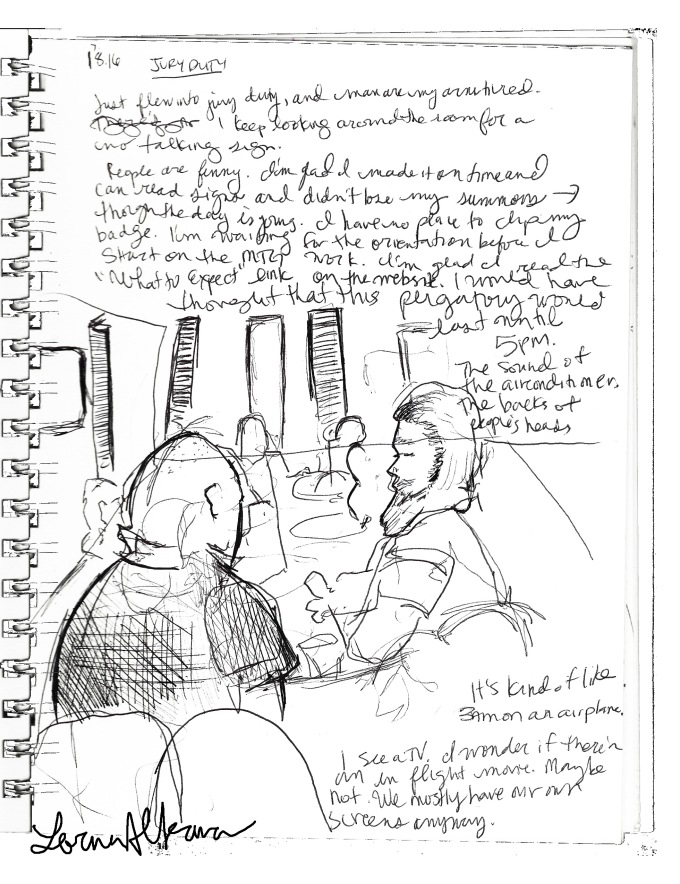 “Just flew into jury duty, and man are my arms tired.  I keep looking around the room for a NO TALKING sign.

People are funny.  I’m glad I made it on time and can read signs and didn’t lose my summons –> though those are pretty basic skills –> and there’s still plenty of time to mess up.

I have no place to clip my JUROR badge.

I’m waiting until after the orientation video before I start working on my Music Tastes Good art installation proposal.  I’m glad I read the “What to Expect” link on the juror call-in website.  I would have thought that this purgatory would last until 5 PM.

The sound of the air conditioner.  The backs of people’s heads.  It’s kind of like 3 AM on an airplane.

I see a TV.  I wonder if there is an in-flight movie.  Maybe not.  We all mostly have our own screens anyway.

At least the people are still.  Maybe I shouldn’t draw them.  Hmmmm

Orientation is basically a reading of the website info I had reviewed.  Eliana, our guide, is like a flight attendant, the cadence, lilting.”

I tried to draw the courtroom from memory while waiting outside, sitting on the floor, stretching my legs, more concerned about tripping someone than being the only one on the floor in a hallway full of benches.  We all sat, listening to the sounds of quickly clicking heels and various clearing throats.  Mostly mine.  Some phones buzzed. 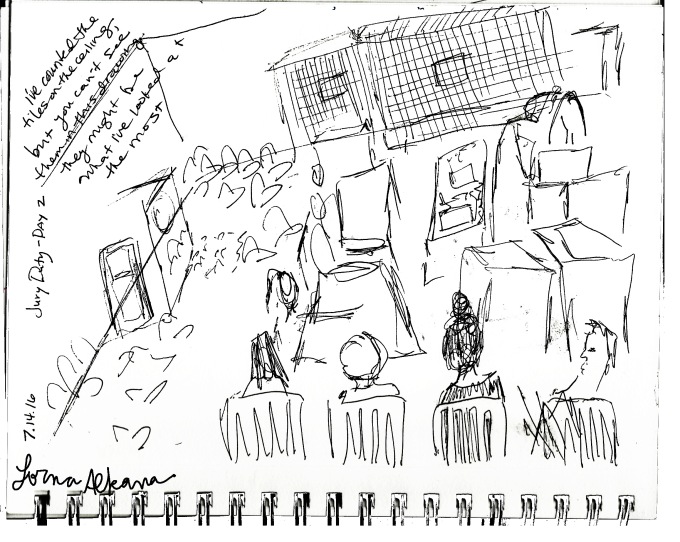 The above text: “I counted the tiles on the ceiling, but you can’t see them in this drawing.  They might be what I’ve looked at the most”

I was able to add to the above sketch after we went back into the courtroom, and I could see what my memory had missed.  I made a siiiick sketch of the courtroom in my juror pad, which had to stay in the courtroom, over the course of the trial.  The notebook was “collected and destroyed” so you’ll just have to believe me.  I mean…I’d testify to its accuracy under oath, but I’m not on trial here.  🙂

I was going to ask if we could take notes, so I was stoked when the judge read that a part of our gig was a notebook and pen.  I know I need to take notes and draw diagrams and figures to remember and process.  I remember trying to joke with my dad when he was taking notes at my college orientation.  “There’s not going to be a test.”  I wish I remember what he said.  I just know how I felt.  I felt like learning and understanding is the point, and for him he needed to take notes.  I’m happy to take notes.

Another note about my dad, and I love making them because he lives in my memories, is his response to something I said about college or the college experience, maybe at that same orientation.  In this case, I remember what he said and not what I said.  He said that ones goes to college to learn.  I have some ideas as to why I found this revalatory.  There was [This might have been a particular revelation for me because I was 16, had been watching an MTV reality show about sororities

I also made sketches of some of the witnesses in the juror book, as well.  Only when there were lulls.  And there were a few.   Never when the judge was talking.  The judge was chill and definitely emphasized the sanctity of innocent until proven guilty.  She was very forthcoming with expectations for each of the attorneys, who may have been quite new.  Ha or maybe they’re just not actors with scripts, my experience with trials, and so they seemed green.  I might elaborate in a different post. [Comment below if you’re interested.]

My memory drawings were no fun, so I took a few pictures in the hallway outside and drew those.  I figured that was better than staring at the people in front of me who I couldn’t talk to.  Tis not against the rules/instructions.  Man, there were so many of those. 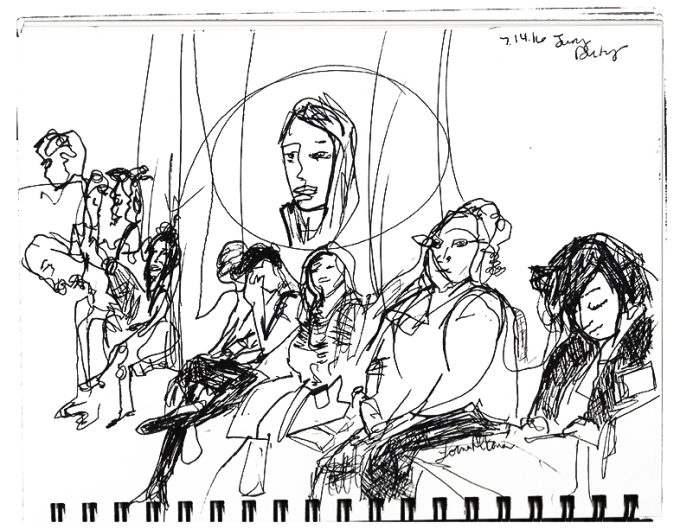 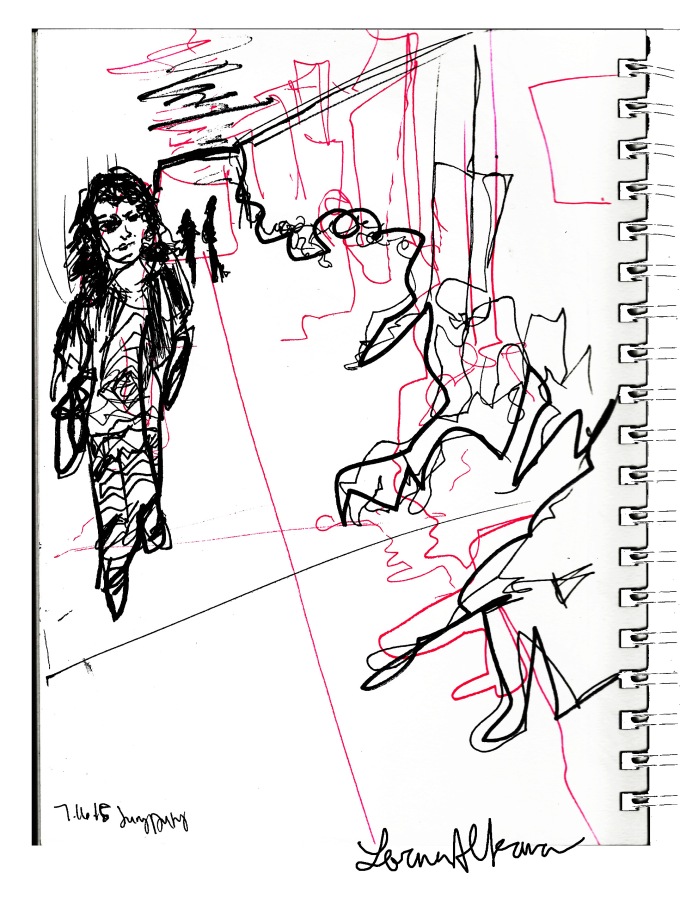