I call the newest installment Part Four, because, as you can imagine, there are two parts of the narrative in between it and Part One.  I really wanted to draw Mindy, violinist/keys of Wam Dingis, so I skipped to drawing her (Part Four) before finishing what I had planned to precede it.  I accidentally left my notebook with parts two and three in San Diego.

Attempting to maintain a chronology [horrible idea?], I thought back to my plans…

Part Two zooms back to an image of me receiving Jordan’s call about the cloaked-oppressor role.  I was in my studio.  It was late.  I rarely answer unexpected phone calls, especially from unknown numbers.  I felt like it was my office hours, though, 10PM on a Sunday, and I took a chance.  Thank goodness.  Jordan regaled me with this concept-driven performance, and I was elated.

Though my notes were miles away, I thought I’d try to move forward anyway.  Here’s my attempt at recreating Part Two.  I’m playing around on Snapchat:

From here, my drawing progressed.  I’d like to say I quickly realized that I did not need to depict myself answering Jordan’s phone call.  Answering the phone is a big deal for me, especially from people named Jordan (long story), but for most people it’s generally lackluster.

Maybe the drawings in my lost notebook (chilling on the beach in San Diego right now) have the fills for the blanks of why I initially thought I needed this Part Two.

I was making things more complicated than they are. Part one:  Jordan calls.  Asks me to wear a cloak and beat up his band.

I talk with Mindy: 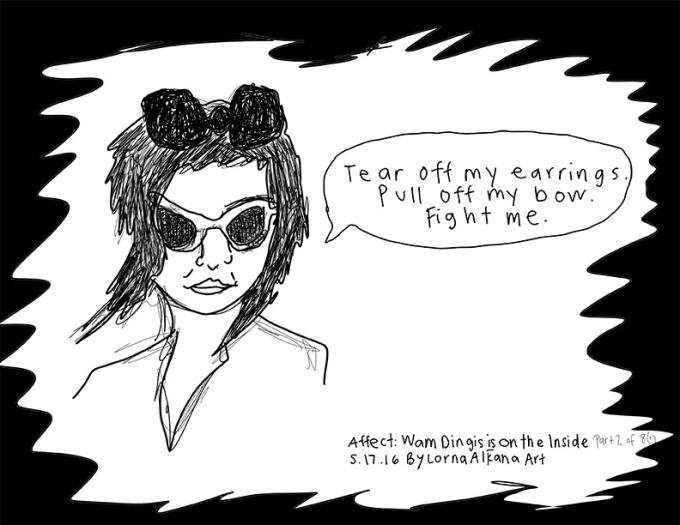 I post on (or around) Mondays with new art/discussion of the process of works in progress, and (or around) Fridays with Comic Lorna in the form of an audiobio comic series called,Affect.